Rafael Ortiz, 1978. Guadalajara, Mexico. Chemical Engineer and MD in Management. I write to answer the questions nobody asked me, the nostalgia for things that didn’t happen. I write to travel without paying a ticket, to kill without owing the deaths; because I don’t think there’s a better alibi than writing.

I’ve never been superstitious. For God’s sake I didn’t notice Tuesdays the 13th, nor did I care about walking under a ladder. But two or three months ago a black cat started chasing me. Sometimes his eyes were yellow, blue some other times. He appeared in front of me when I was leaving my house and I think I was cursed there. I found him all the time, on my way to work, walking on the roof tiles and hanging around in the garden. He was harassing me; he was spying on me with those headlights of sun and moon he had in his forehead.

The worst part was his hair, that filthy 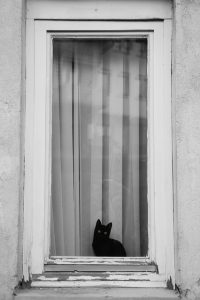 stubble that got stuck in my throat. Also, the horrible smell of ammonia that clogged my nose and left me unconscious, without any oxygen. I bought supplies for a long time, I quit the job at the office where I worked, I stopped going out, covered the windows and the fence to keep him from coming in. Any precaution was in vain. Maybe that demon would come from underneath the door, I could almost tell. One night I was awakened by the noise of his bones breaking to become elastic, to penetrate through the slit where an envelope could hardly fit. The next morning he settled under my bed and I couldn’t move. I felt his nails tear the fabric first, then the padding, then the steel springs and finally my back, scratching it between a pair of planks at the base of the bed. I felt him rip my spine day and night like a musician playing a harp with death music. Going to the bathroom would have been reckless. I preferred to let my urine permeate the mattress, to splash it… Isn’t it true that cats are afraid of water? I peed on him until he drowned, until the room was flooded and a yellow wave dragged us both.

During those days my sister arrived. I don’t know how she found me, who knows when the last time I’ve seen her was. I don’t know why she came, she just cried, she has not stopped since. She came and left the door open, she is so stupid. Behind her came those intruders who grabbed me, tied me up, and injected me with this bitter sleep that steals my memories. Not all of them: I’m a little boy with shorts, head almost completely shaved, muddy shoes, one of my suspenders is broken. My breath fogs the window of the pet store, on the other side a Siamese kitten licks his legs, does little caper, shatters a newspaper and deforms his nose gracefully against the greasy glass. My mother says ‘No, son, don’t even think about it, your father will kill us both.’ We left. However, I returned to the store the next afternoon with all my savings and a few more bills that I stole from her purse. At night my dad comes to the house drunk, the usual. I hide Maxwell, as I have baptized the pussycat, who smells my fear and howls his sentence. My dad takes him out of the shoebox, his lair; he squeezes him at the neck. ‘Didn’t I tell you, damned boy, that I hate these animals?’ And when he says this to me, he throws him to the face of my mother, the poor woman who had come to defend me. Maxwell uses his nails trying to cling to something; to the skin of my mother that falls apart in streams of blood. Then my father kicks me and punches me. When I run out of tears and he is out of breath, he takes his hat and goes away; I never see him again. Mama is absent, she is alone, and her disfigured face doesn’t stop reproaching me. Not a single day.

I don’t think Maxwell drowned in my urine. Although he must have drowned, it was a big yellow wave. Maybe he just spent one of his many lives. In this new one, Maxwell is not Siamese nor has now the frightening black color. He is white, with very short hair, so white that it hurts to look at him for a long time. He lays on my bed, on my feet. He takes away the cold, his purrs calm me down. He sympathizes with my misery as he looks at me with those new greenish eyes. With slow, barely perceptible movements, he makes my hours pass faster; at least I feel them moving, dragging the minutes a little forward. Since my sister arrived with these men, my days had stopped completely. I’ve already said that I’ve never been superstitious, but Maxwell’s return must be a good omen.

Rafael, thank you so much for translating and sharing this short story with me. I find it very intriguing, all the more so because of my background in psychology. In my opinion you’re a highly talented writer! Thank you for letting me put your story on my website for others to read.

I met Rafael in Shanghai in September 2017. We got to talk about his writing soon, as he mentioned them when I told him about my psychology studies. He took the effort to translate some of his stories, since my Spanish (the original language of his writing) is not that good. If your Spanish happens to be better than mine, go here to check out Rafael’s originals!

* Read next: To the girl who is tired of smiling and faking orgasms, by Katrin 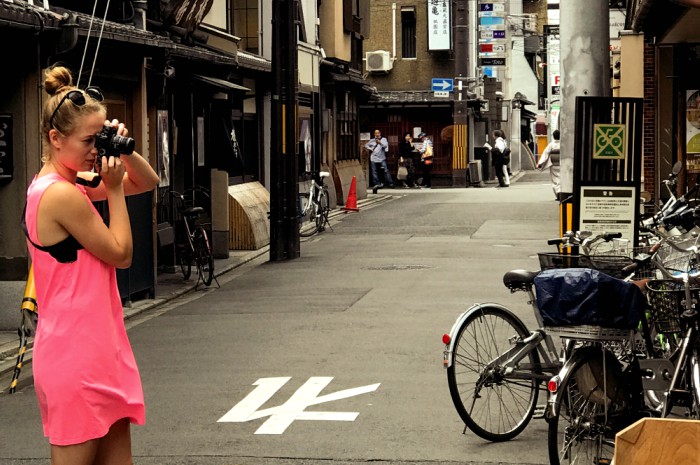